Hello everybody, I hope that you all had a wonderful week. My week was honestly great. I’ve been battling a cold that’s been creeping in slowly, but surely and dealing with some stomach issues, but I’ve had a very productive and fun week & weekend that I cannot wait to share with y’all!

Last Tuesday I brought up the fact that Jordan and I started a 10-day Advocare Cleanse that began on Monday (October 16th). The following Wednesday, I picked up a couple of Starbucks reduced-fat turkey bacon breakfast sandwiches for he and I to eat. They were delicious. I love the fact that they sell a sandwich made on whole wheat bread and is also low in calories, fat, and sodium. 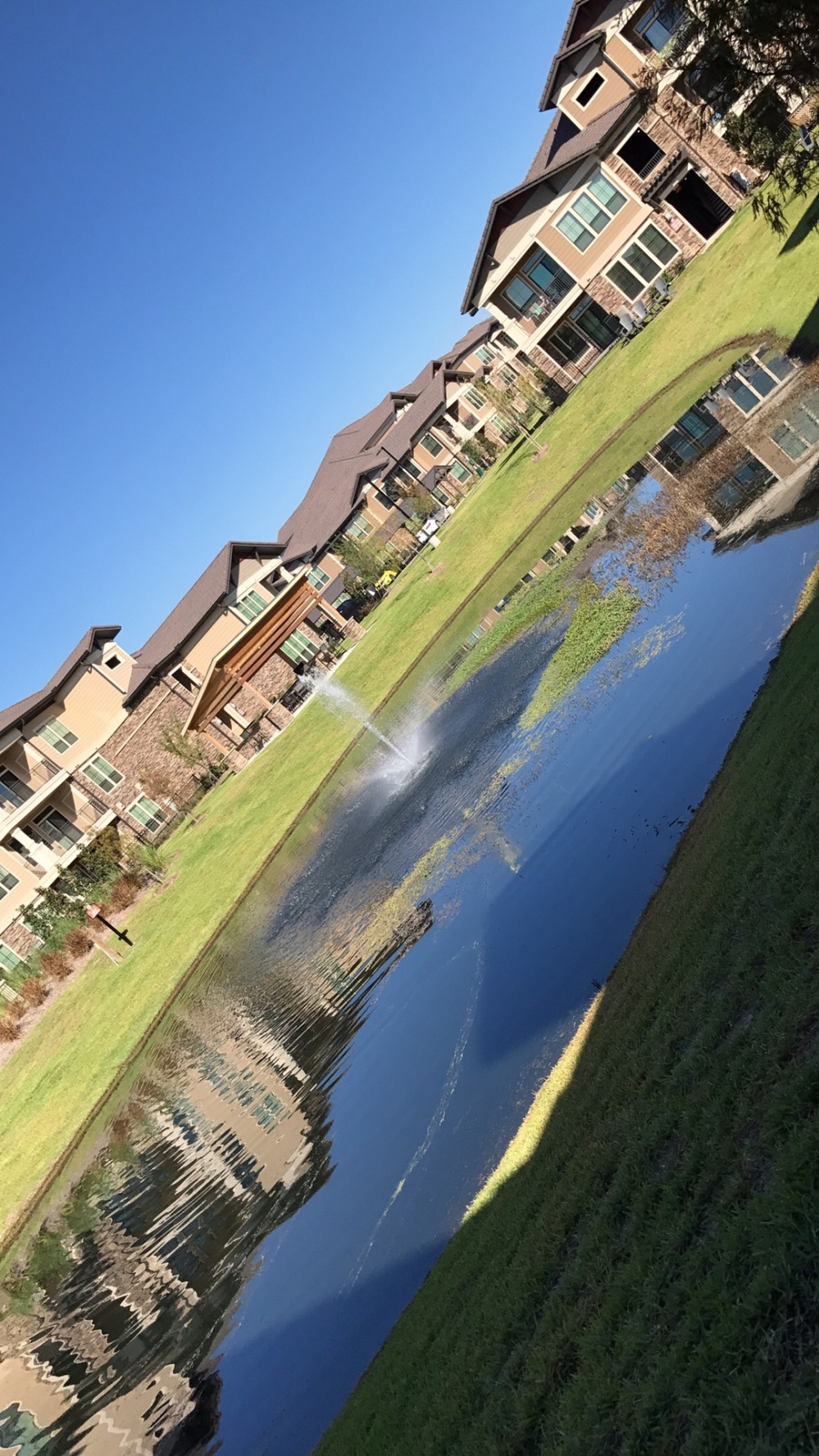 Around lunch time I went for a run. I used to be a big runner, but it’s been a long time since I ran consistently and many miles. I’m excited to get back into it. It felt so great outside on Wednesday and I loved my view. 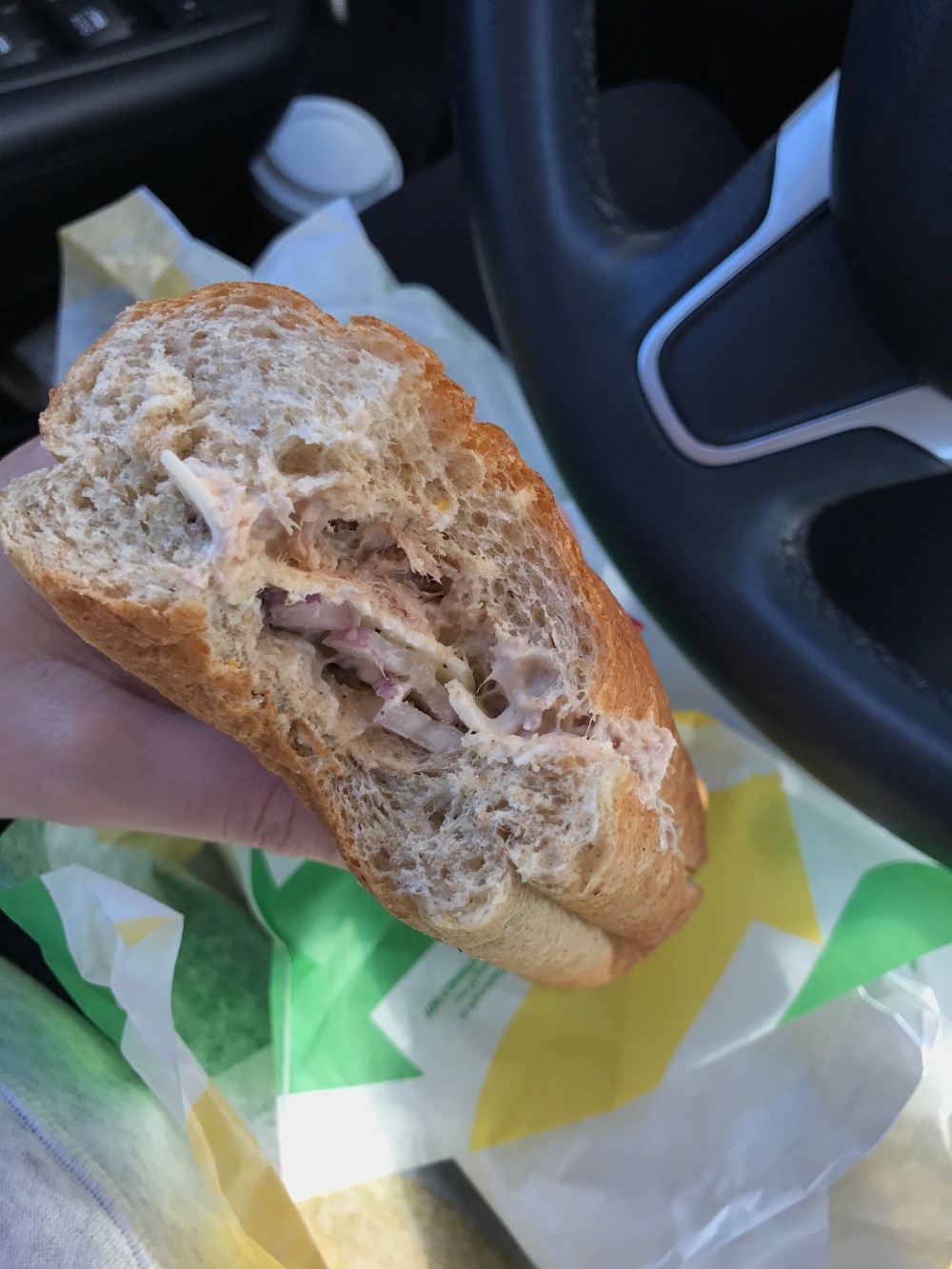 I had a fun day planned with my little brother, Hudson, so before I picked him up I stopped by Subway to grab a tuna sandwich on wheat bread with American cheese, onions, and light mayo. 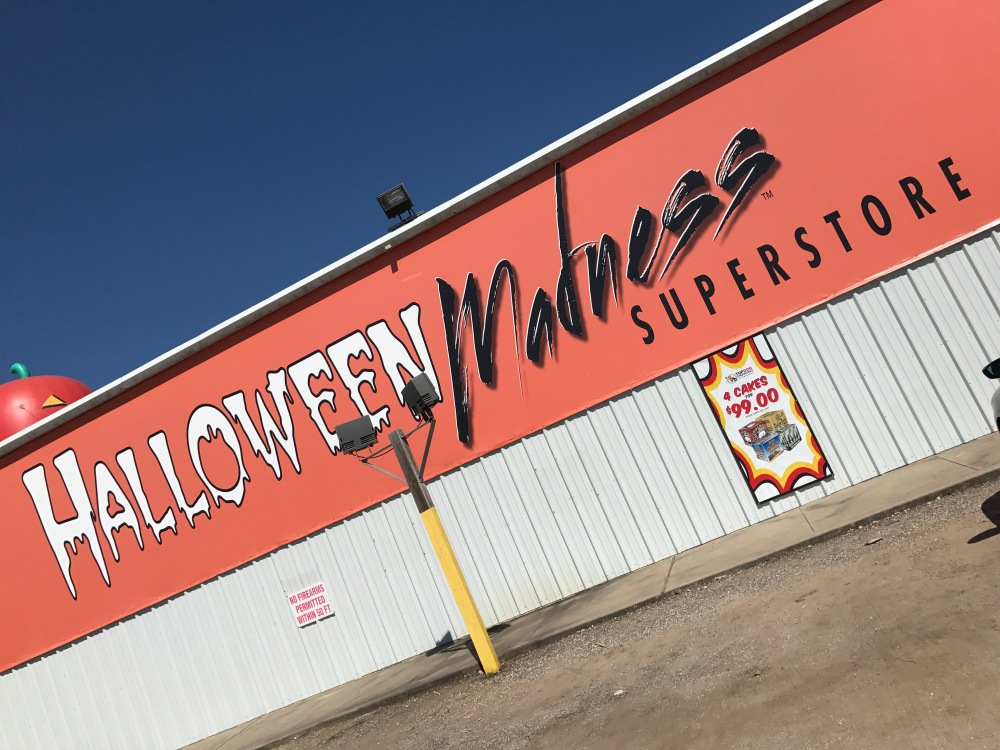 Hudson and I had tons of fun at the Halloween Madness Superstore where we found this awesome Knight costume. We also came back to my apartment to play Harry Potter Legos on my PS3 and snack on spoonfuls of peanut butter.

Wednesday night, Jordan and I got to watch the end of the Astros vs. Yankee’s game when they were sadly defeated for a second time in New York. After the game, we ate at Lupe Tortilla. We ordered beef fajitas cooked without butter and wrapped with lettuce instead of flour tortillas. The cool thing about cleansing and being able to find healthy options while eating out. I will from now on be ordering fajitas like this or with wheat tortillas because they taste amazing and I feel so much better eating them this way.

Thursday, was day 4 of the cleanse. This fiber drink has been tearing apart our stomachs and is not the most appetizing thing to drink, but I will honestly say that I have been feeling so much more energetic and feel way less bloated from all of this. 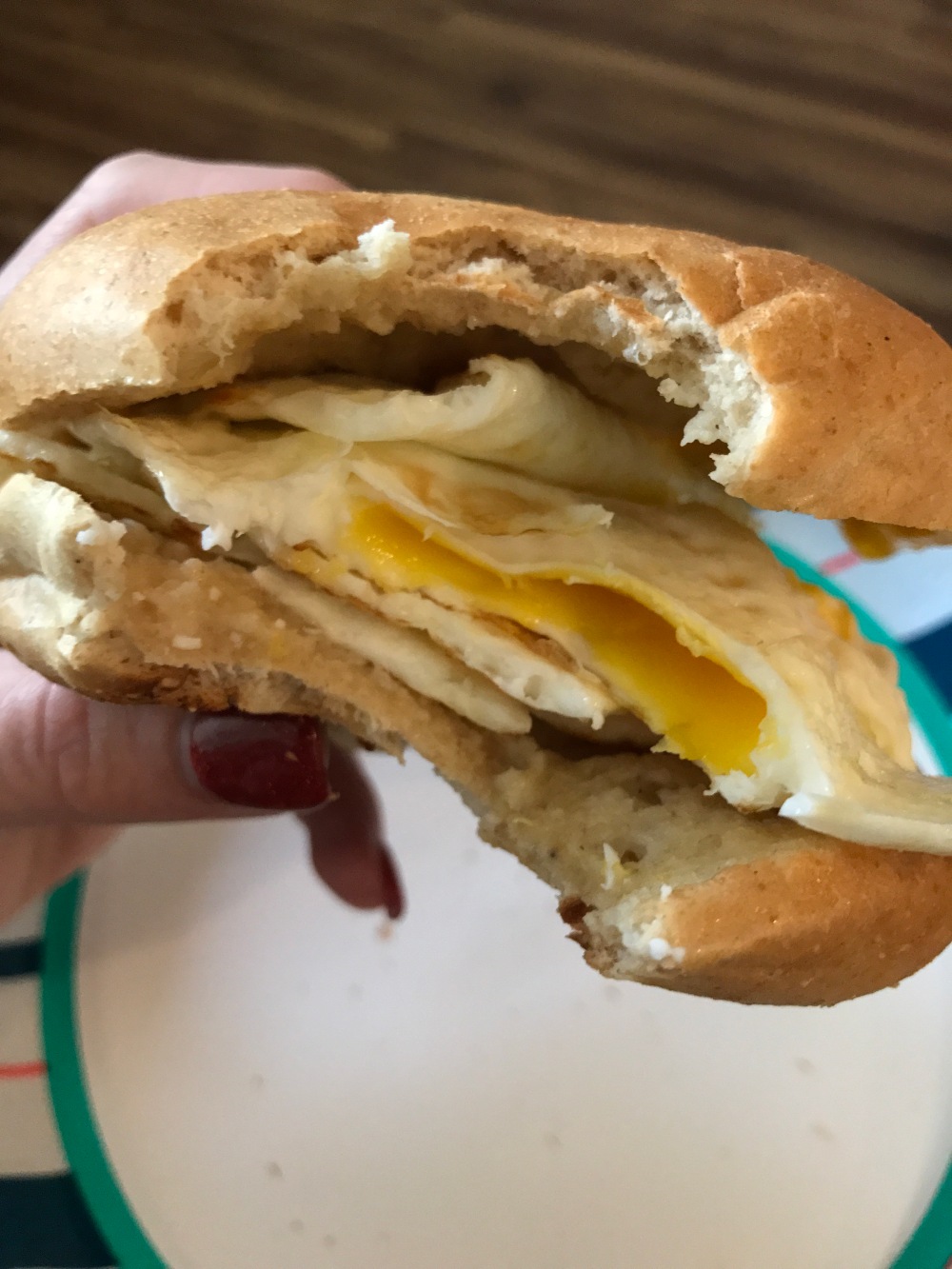 I made myself an egg bagel with Dave’s Killer Bread. This is honestly one of my favorite meals, especially with some low sodium bacon.

I wasn’t feeling well at all Thursday, so when I got back from work, I made myself a rotisserie chicken salad sandwich, took some medicine, and then took a nap. 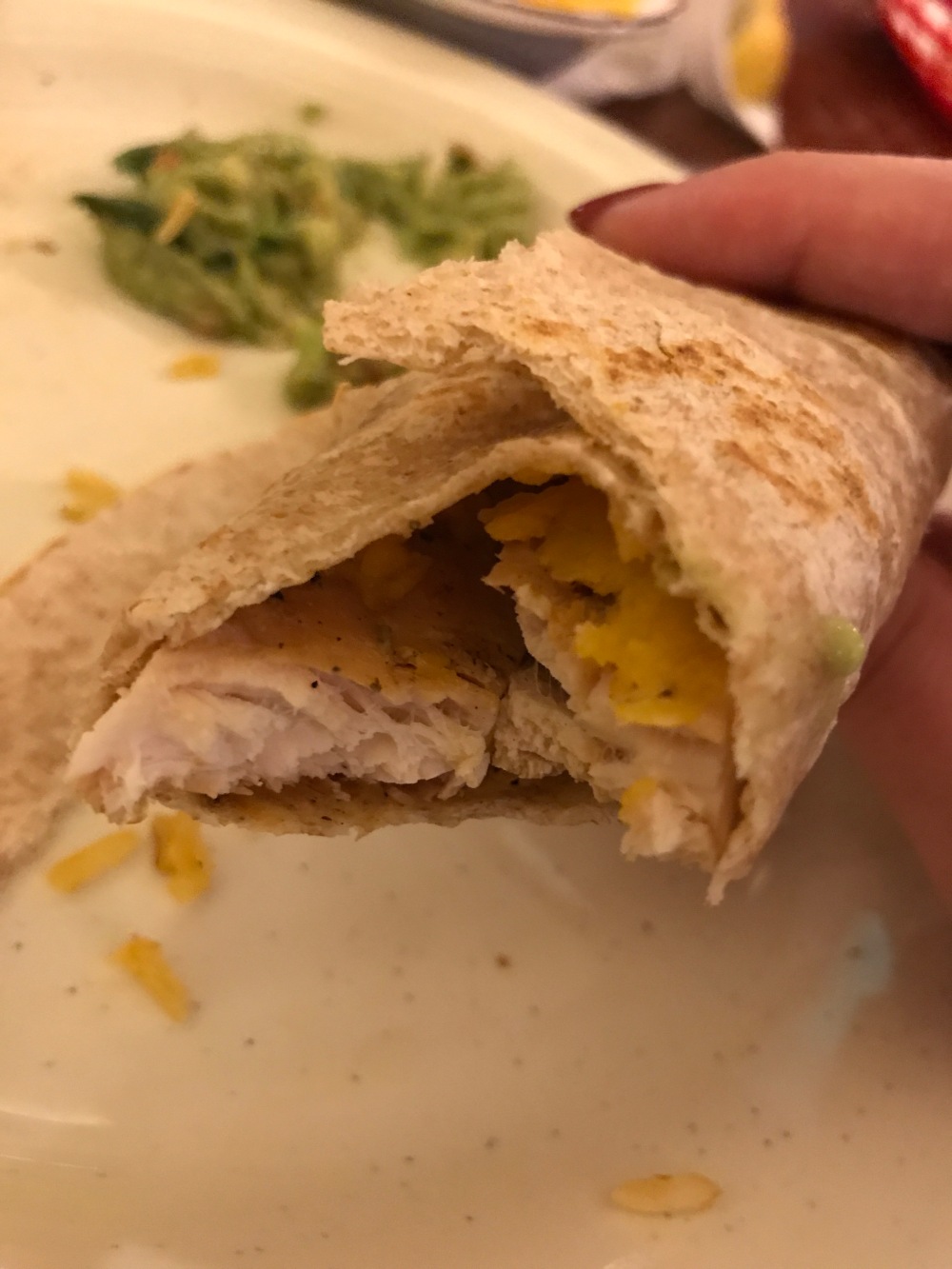 I went back to work Thursday evening and after work I was able to catch a little bit of Jordan’s younger brother’s football game. After the game, we all went to Los Cucos. Jordan and I ordered mixed fajitas cooked without butter and with wheat tortillas.

After a long morning of working on Friday, I came home to make myself and egg bagel, relax, and get ready to go back to work around 4pm.

After work, I went with Jordan to watch the Astros game. We picked up some sushi to eat. I ordered a couple pieces of salmon sushi and a California roll and he ordered the Rock n’ Roll from Super Yummy.

Saturday morning was a VERY long morning for me. I was not feeling well at all and it was freezing cold at the rink. I got there at 7:30am and wasn’t finished until 1:30pm. I had a little break around 10am and grabbed some breakfast at La Madeleine. I ordered some scrambled eggs, wheat toast, and bacon.

Jordan and I baked some healthy pizza’s for lunch. I bought low-fat pepperoni, mozzarella cheese, roasted garlic pizza sauce, and wheat pre-made crust to use. They were delicious!! We ate lunch and watched the last 2 episodes of Narcos season 2 while Mila took a nap. The last two episodes were crazy and I cannot wait to see what they do with season 3. 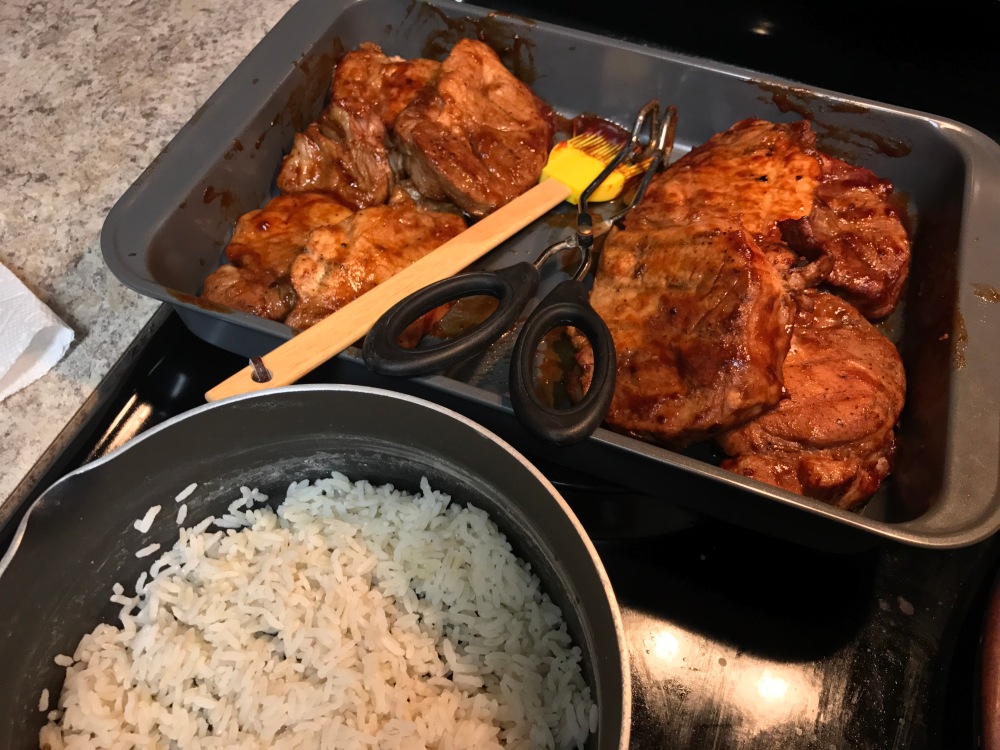 For dinner, we made some rice and grilled BBQ pork loin and lemon pepper corn.

We all sat to watch the Astros game with so much excitment as they clenched the American League Championship!! We cannot wait to cheer them on during the World Series. GO STROS!!

After a good night’s sleep, I woke up Sunday to make us some breakfast. I made some of Annie’s organic biscuits, low sodium bacon, and eggs sunny side up. It was delicious and surely filled our tummies up for most of the day. 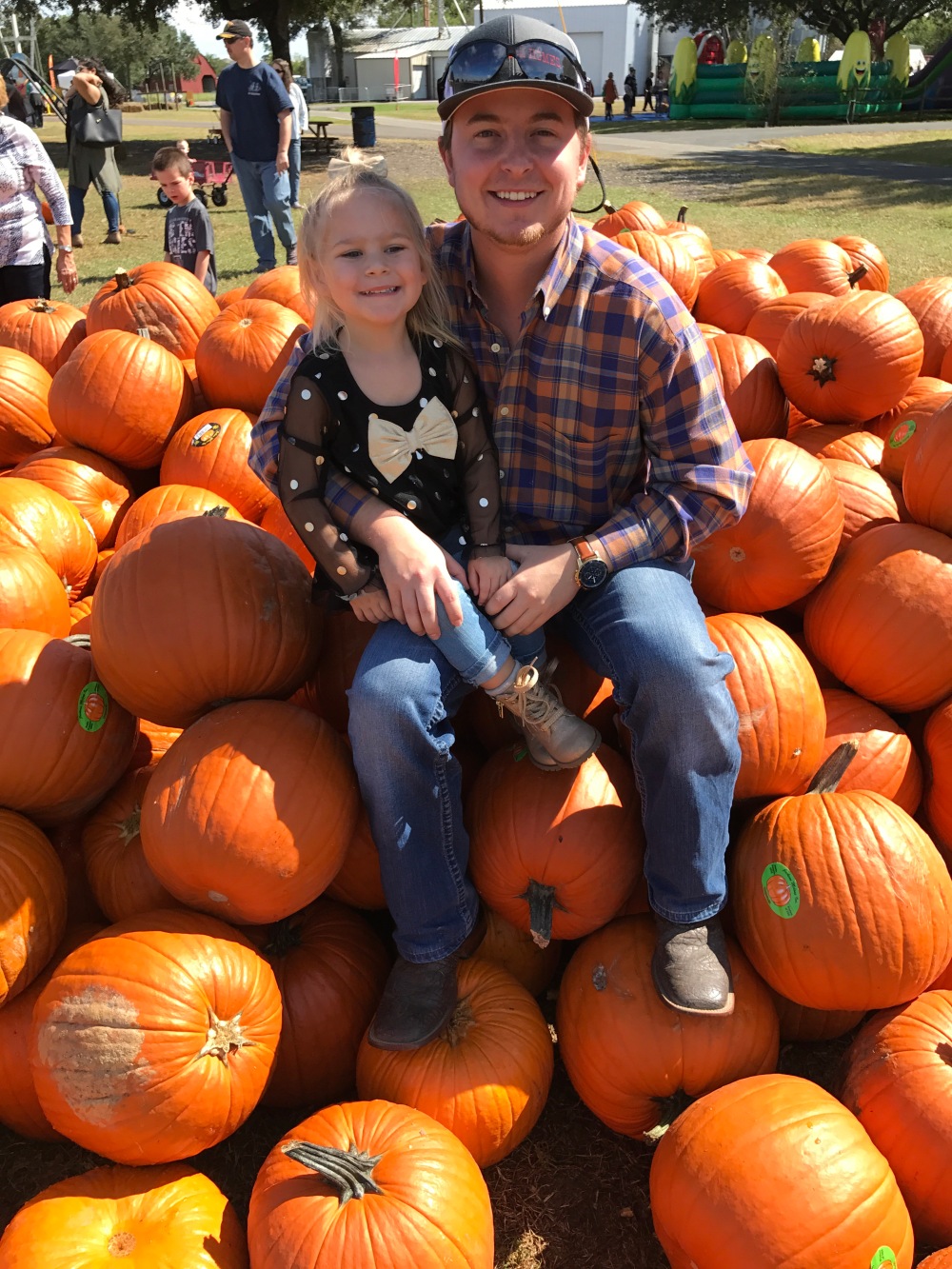 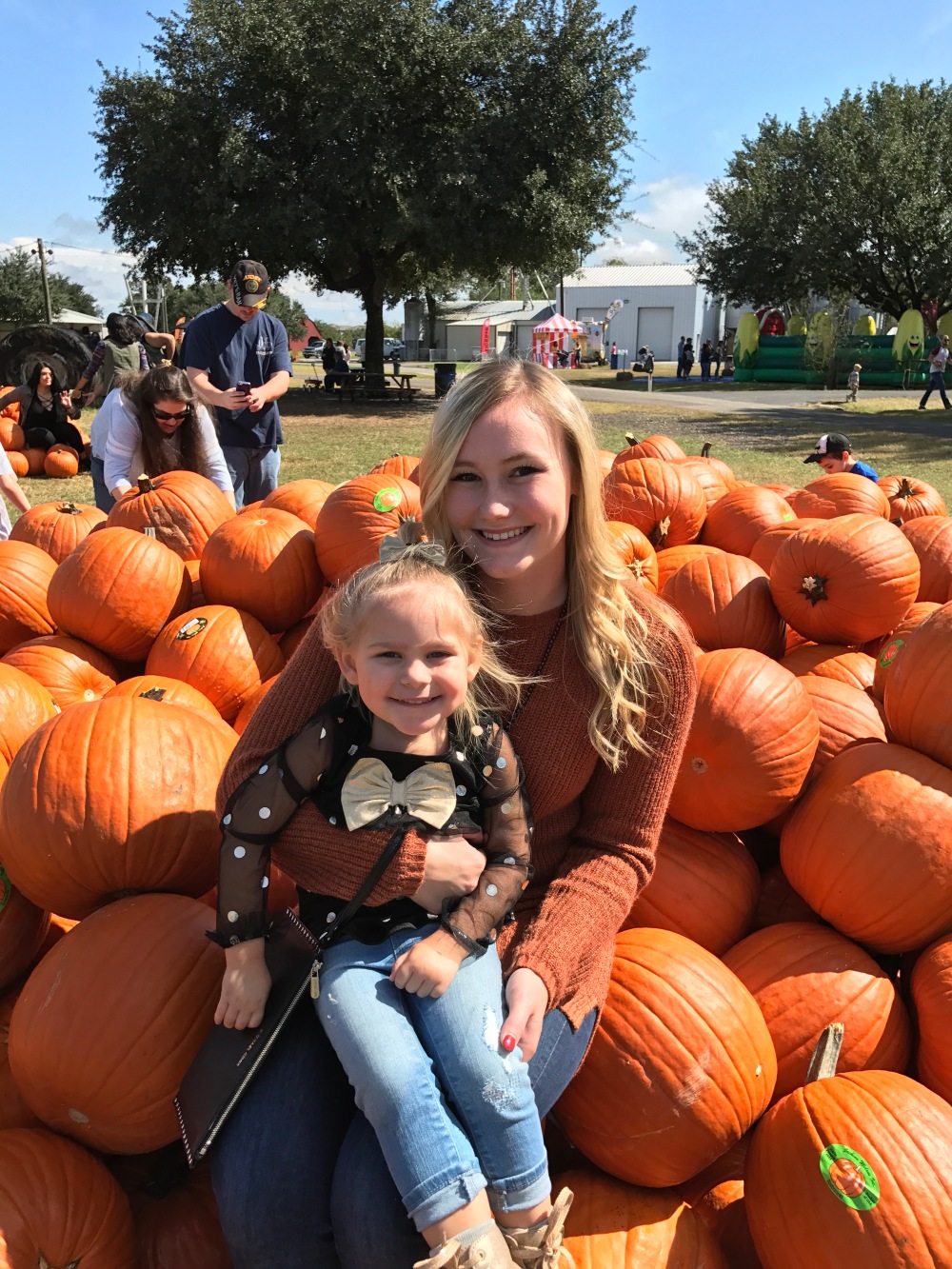 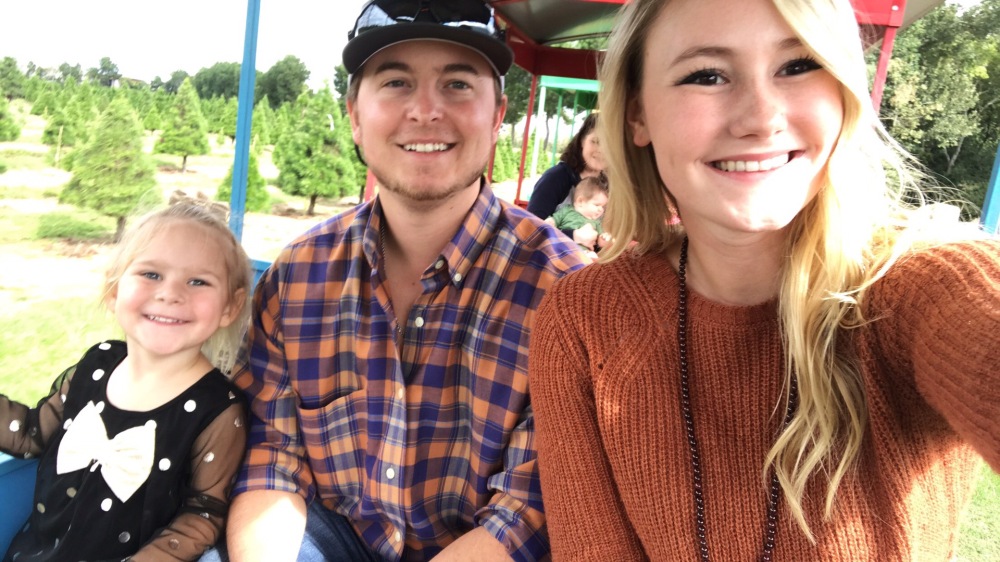 We all got ready and then headed to the Pumpkin Patch. We had so much fun. The weather was pretty nice whenever the sun was hidden and Mila had a blast looking at the pumpkins, petting the goats & cows, jumping in the jump houses, and riding on the train and hay ride. Jordan and I really enjoyed it all too! We also picked out some pretty pumpkins to carve. 🎃 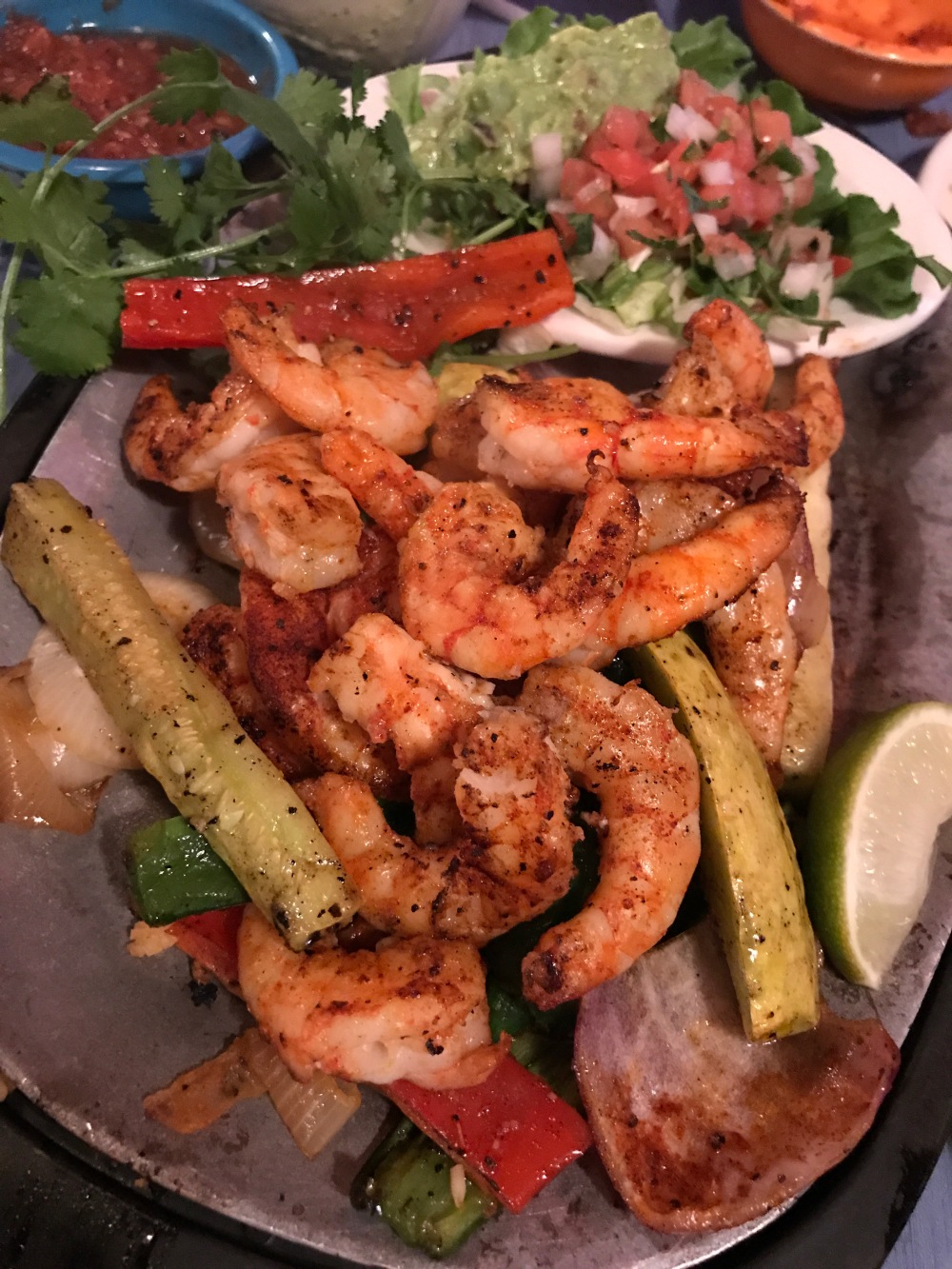 For dinner we had Mexican (AGAIN) and it was delicious. I’ve gotten something a little different each time and it’s been nice trying new things. We ordered Pappasito’s shrimp fajitas cooked without butter and served with wheat tortillas. Jordan and I were happily surprised that the shrimp fajitas came with zucchini and squash, which we both loved. I squeezed some lime juice on my fajitas and sprinkled a little bit of cheese. 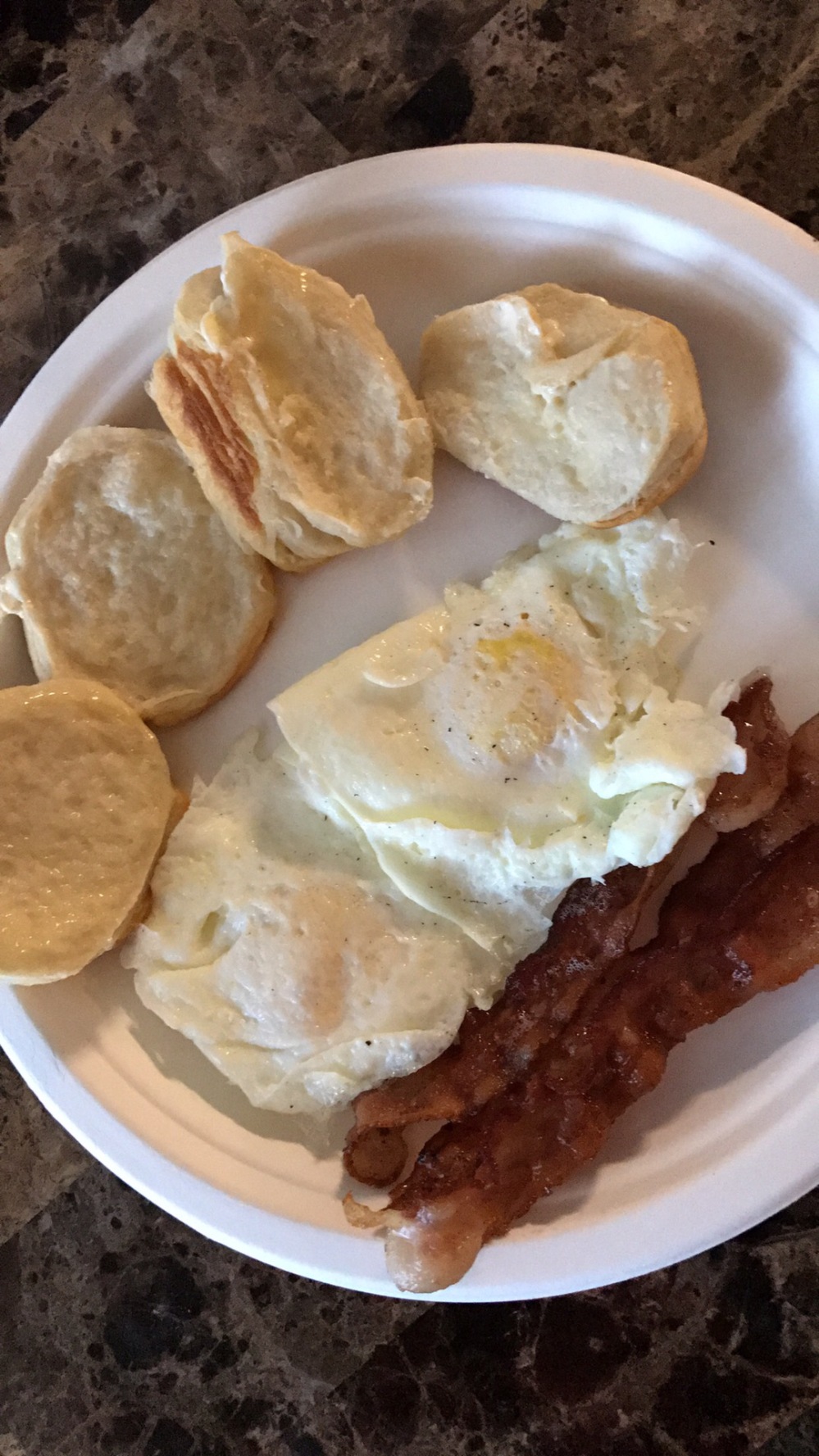 I woke up early Monday morning to make us some breakfast. We had some biscuits leftover from the morning before, so I cooked some eggs and low sodium bacon to go with them. I was feeling pretty terrible all day Monday, so I spent most of my day lying on the couch sleeping and watching “Mindhunter.”

Today is day 9 of our cleanse, which means that tomorrow is our last day. I’m proud of the both of us for sticking with it and eating so well. I’m excited to be eating right again, but also cannot wait to be done drinking that fiber drink. Cheers to being healthy!! 👍🏻

I have lots of fun plans this week and can’t wait to cheer the Astros on during the World Series! I hope all of you have a great week and I’ll be back very soon!